10 Facts About Castle Sieges in the MMORPG 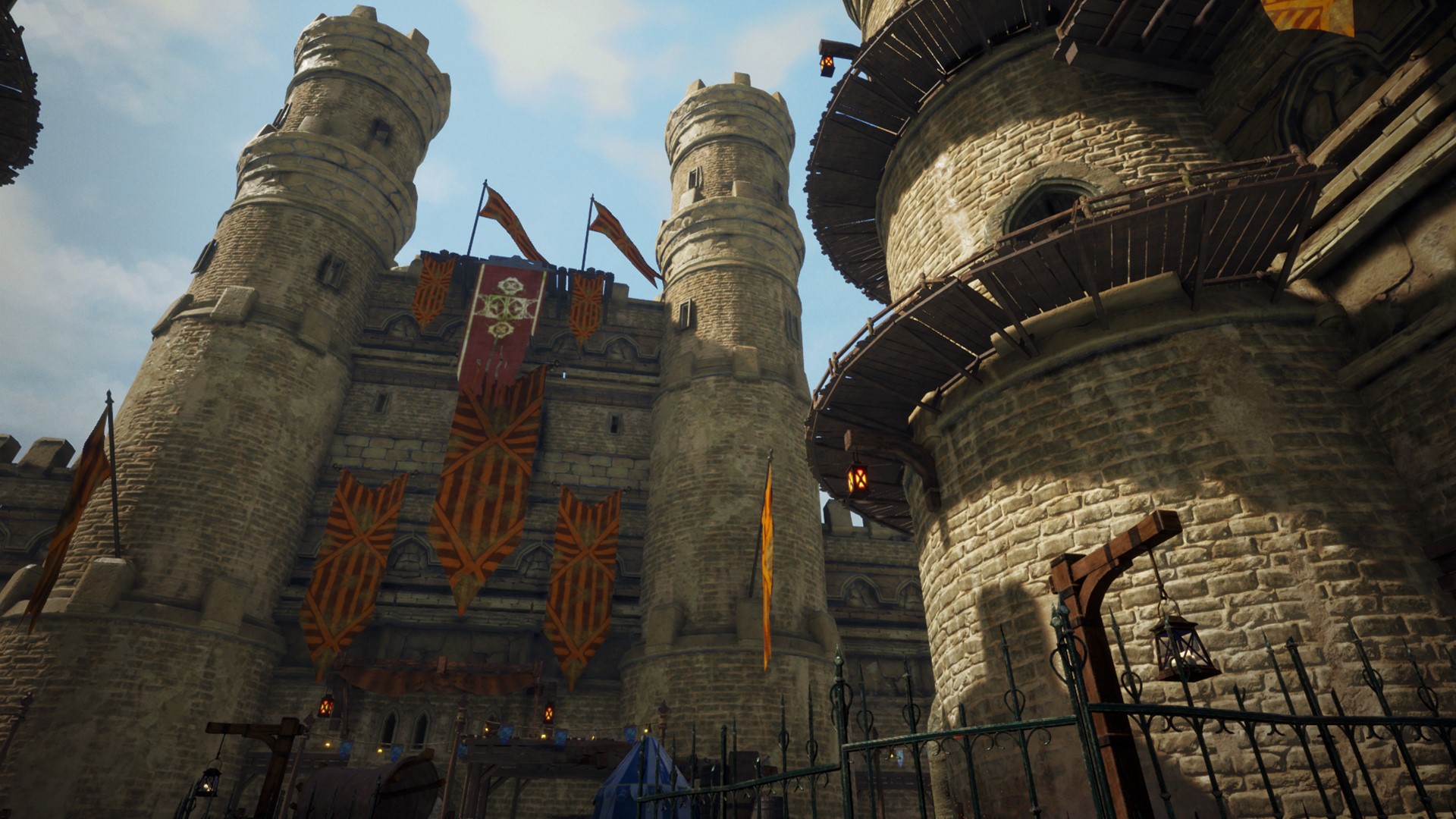 If you’re interested in massive battles that revolve around tactics and strategy, then Castle Sieges might be for you! Check out these 10 facts about Castle Sieges in the Ashes of Creation MMORPG!

Castle Sieges are intended to be massive events with hundreds of people involved in a single Siege. One of the reasons that Ashes of Creation Apocalypse exists is so we can address the challenges in ramping up the number of bodies that we can handle simultaneously. With our latest test hitting over 200 simultaneous players, we’re ready to push that number even further. Our goal is to have the largest organized PVP battles of any MMORPG.

For every play, there should be a counterplay. We often see Castle Sieges turn into zerg-fests, which really doesn’t capture the epic, back-and-forth battles we wish to see in Ashes of Creation. One of our key pillars is that Choice Matters, and that applies to tactics and strategy as well. A well-formulated battle plan should win out over stat sheets and bodies. Zergs will generally be difficult to pull off, and will be eminently counterable through siege weapons, traps, and other battlefield tricks.

Managing a Castle is a Full-Time Job

Should you be deft enough to take a Castle, you’ll now be responsible for managing it. Castles will have their own Nodes associated with them, and developing and defending those Nodes will determine the state of your Castle during the next siege. If you’ve done a good job managing your kingdom, then you’ll have more and better options available for deployment during the next siege. If you let your populace fall to ruin, you may have to rely solely on your own devices.

Every Castle is Different

With five Castles in the world, and each having been owned by different civilizations from the far-flung past of Verra, you can expect that each Castle has its own character. Different terrains and different layouts will result in each Castle having its own advantages and disadvantages. Just because you have managed to take one Castle will not mean that your strategies will pan out in the next. Commanders will have to take into consideration the lay of the land, time of day, weather, and even seasons into account when forming their battle plans.

Every class and profession has something to bring to the table during a Siege. Whether it’s a cabal of Summoners working together to call and bind a behemoth from another plane or a pair of Artisans creating a new weapon of war to defend the walls, choice matters, even in a Siege. Again, the sense of play/counterplay is important to us, and deciding who to bring on a Siege will depend on your resources, who you are fighting, and where you are doing the fighting. Maybe this month you want to try for the Dünzenkell Castle, but the server has been light on high-quality wood, and you won’t be able to deploy as many Siege Weapons as you want. Do you bring more Summoners, to try for another behemoth and hope they can maintain control? Or do you double down on subterfuge with your Rangers and Rogues, entrusting them to get behind enemy lines and get those gates open?

Who gets the Castle first?

These Castles are occupied when players arrive on Verra, and their current inhabitants will have to be removed before any player can claim them. Castles will be dangerous and high-level raid zones until they can be cleared, and the first group of players to do so will gain the Castle as their reward.

Everyone Looks Up To You

Castles have direct power over the Nodes that belong to it, but also have soft power across the entire region it belongs to. All Nodes belonging to that region pay fealty to the Castle in the form of taxes paid directly to the Castle. The Monarch sets the rate, and can use those proceeds to upgrade defenses, maintain the Castle’s direct Nodes, or provide buffs and benefits to the citizens of that region, as the magnanimous ruler that you are.

As a Siege rages on, there is a sense of territory and progression through the battle. These are represented through Control Points, and each side starts with a few already owned. Others are present, but neutral. As Control Points are captured by one side, that side gains a temporary buff and an increase to their spawn rate. The other side will find that their spawn rate has decreased and their ultimate victory condition has been pushed just a little bit further from their reach. The spawn areas also have a portal which will allow the side that owns it to teleport to any Control Point that side owns - perfect for backdoor shenanigans.

We’re working on a destruction engine that should help us to make a Castle Siege that feels cinematic and visceral. Having shards of the walls tumble to the ground after a trebuchet scores a hit will feel satisfying in a way no other Castle Siege has been able to offer in an MMORPG like this. Maybe you don’t need to take down the whole wall, maybe if you blow open a big enough hole, that’ll be enough to turn the tides. 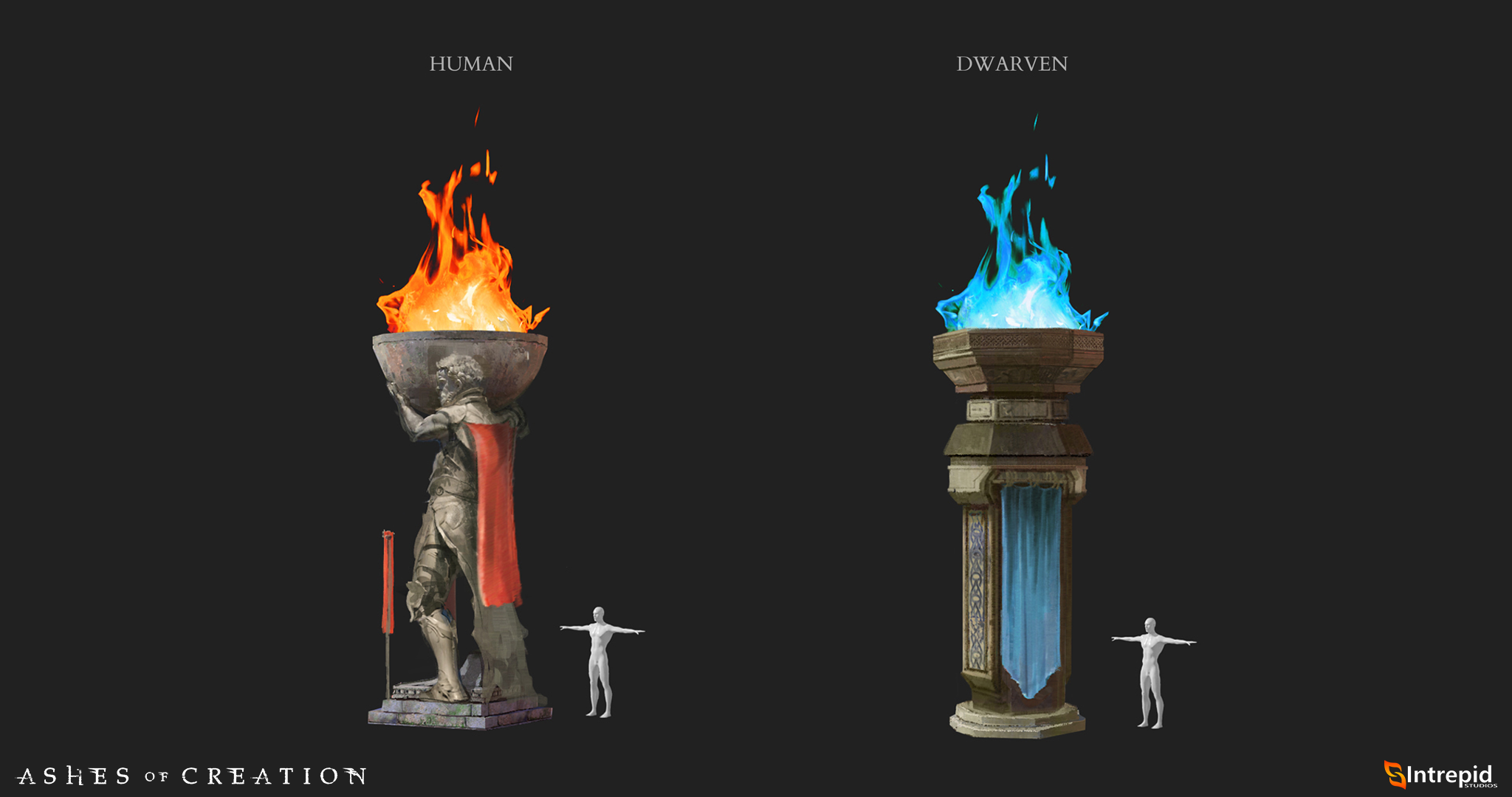 It wouldn’t be a castle siege without siege weapons. These are massive machines of war that enable attackers to bring down the walls, and defenders to keep their keep safe. Crafters can bring their own powerful schematics to the battlefield, or you can order baseline siege weapons from your friendly neighborhood siege master NPC. The Castle’s defenders will be able to deploy their own defensive weapons and turrets based on how well they maintained and defended their own Nodes. The sky will be illuminated with fire and fury. 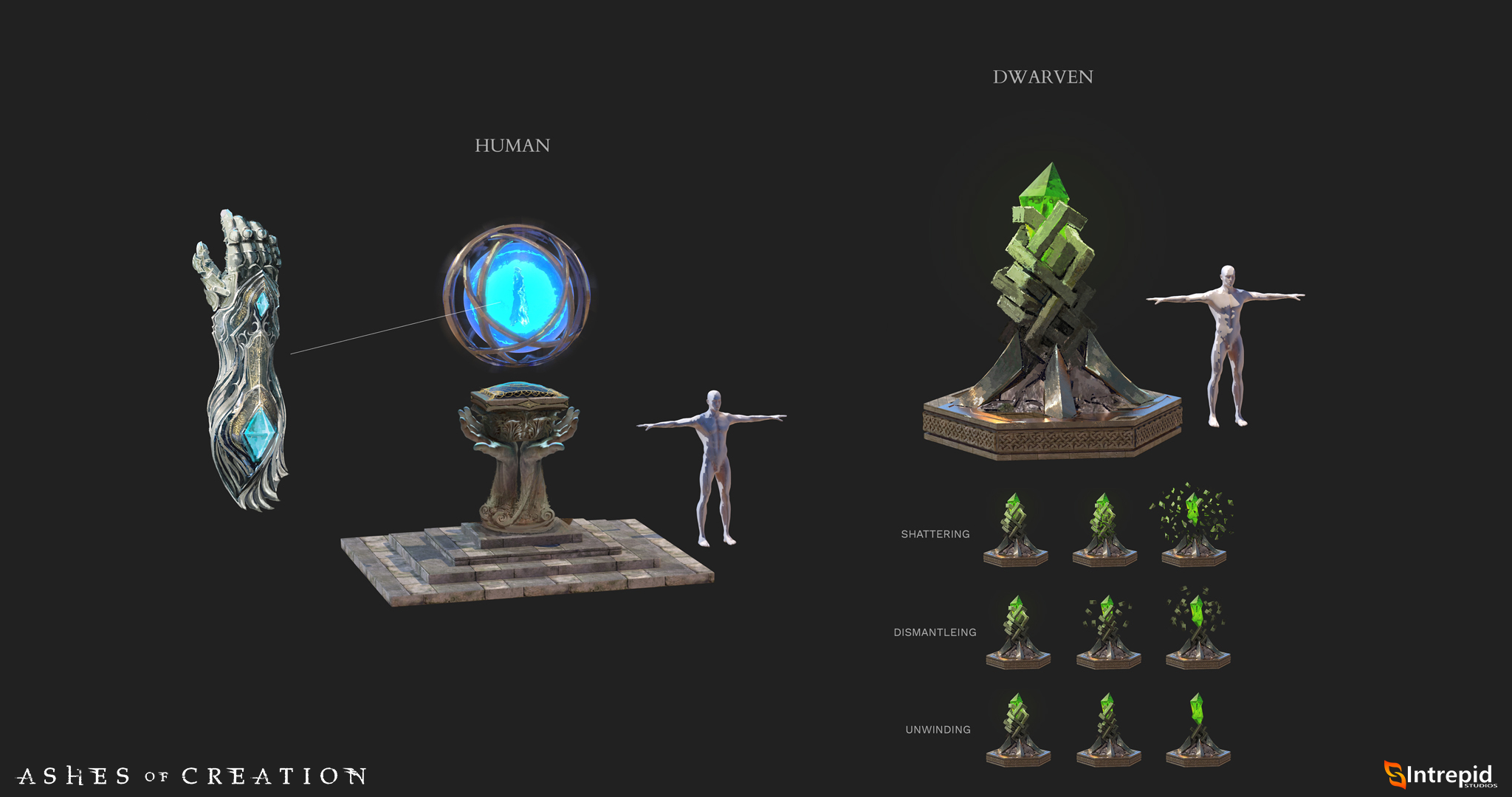