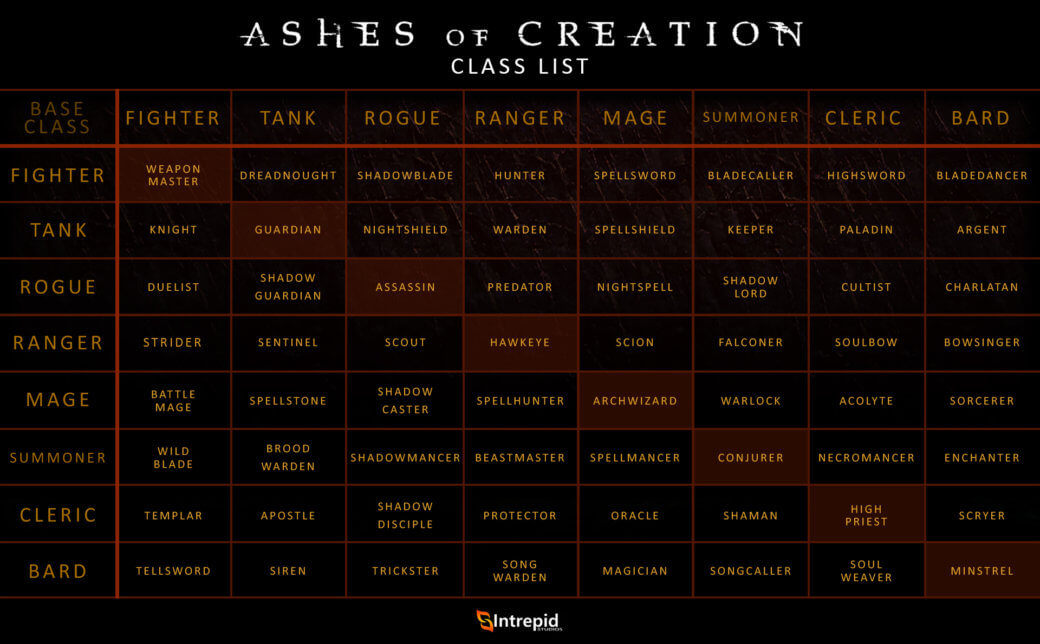 Class is in Session

One of the most important decisions you’ll make in your Ashes of Creation career is picking your class. It shouldn’t be something you stress over too much, but it also needs to be something that lets you feel unique enough to not be “Nameless Sword-and-Shield Hero Number 47”. With that in mind, our class system lets you pick one of eight (8) base classes to begin, and then later you’ll be able to mix in a secondary class to create one of sixty-four unique class mixes.

Secondary classes in our game are more than just another list of spells and skills to add to your hotbar. They’re not secondary in name only, as each one brings in unique augments that fundamentally change how the primary class skills work, what they’re called, and what they do. A Warden must feel uniquely different from a Spell Hunter, and a Beastmaster must feel unique when partnered up with a Necromancer.

When players choose their primary class, it’s not just dictating how the next several hundred hours of gameplay will go. The secondary class choice, which comes after some time getting used to the world of Verra, will be more fluid. If you choose the Fighter and the Rogue to make a Shadowblade, but eventually want to try your hand at Summoning to make a Bladecaller, you’ll be able to do so. It’s only the primary class that cannot be changed. And hey, that’s what alts are for!

As we march into 2018, we’ll be detailing each of the eight Base Classes, and all 64 of the combined classes with brief rundowns of their lore, skills, and mechanics. Today, as we begin our Friends and Family Alpha Zero test, we wanted to show you just how diverse we expect our playing field to be. The classes adhere to roles like tanking, DPS, support, and healing, but it’s really so much more than that. Each one must provide a true fantasy fulfillment for the player – you want to be a badass, no matter what your class. And that’s a promise we intend to keep.